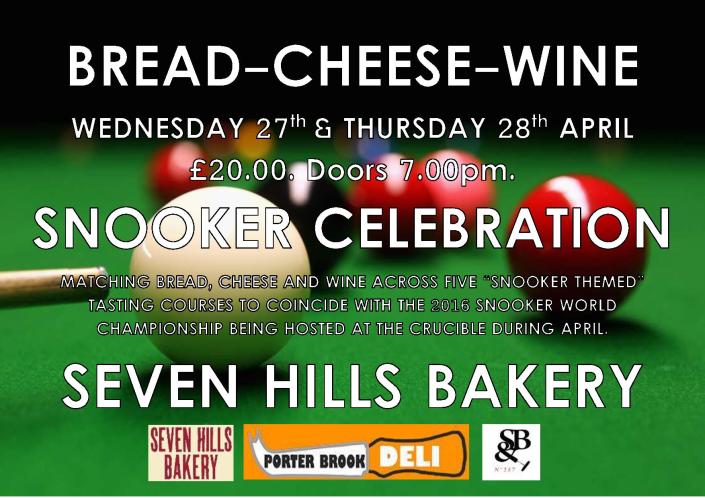 This dough is made using a poolish which means that part of the dough is  fermented overnight to increase flavour and texture. We then added olive oil for elasticity  and flavour. The ‘cues’ are shaped by hand, proved then baked in a fairly hot oven to dry  out.  Sundried Tomato Ciabatta : This is made using the same method as the ‘cue’ but with a more  relaxed dough (added water). We then add soaked Sundried tomatoes.

A traditional Italian bread. Ours is made as a lean dough, just flour, water,  salt and yeast. Herbs and lashings of olive oil are then added. This bread is not shaped as  such, but is rather pressed into a tin.   Butternut Squash & Sesame Roll : No yeast is added to this dough. A wide range of yeasts  and bacterias exist on flour and in water. We ferment the flour and water together to make a  ‘mother’ and this leavens the bread. We make this bread over a three day process which  gives it its chewy, holey texture and slightly tangy taste. We added roast butternut squash to  the dough, rolled it in sesame then proved it in the fridge overnight before baking.

We use Yorkshire Organic stoneground wholemeal flour for this dough. It  is both grown and milled in North Yorkshire and is delicious and naturally sweet. We make  this bread using a ‘flying poolish’ which is where all the yeast is added to one third of the  total flour and water and fermented for an hour or so before being added to the remaining  flour, salt and water to make the final dough. This is one of the few loaves me prove in a tin this is because the structure needs the support of the tin to rise.

FRAME 4. PINK  Beetroot Sourdough: We make all our sourdoughs using the same method (just flour, water  and salt) but with differing flours and sourdough starters. This bread is made from our white  sourdough. We grate beetroot fresh and add to the final dough. The beetroot makes the  dough very soft and naturally sweet.

FRAME 5. BLACK  Black Bread: This is our version of a Russian Black Bread. This is based on our 100% rye  sourdough loaf. To which I added Yorkshire Organic Millers 85% white flour (regular white  flour is around 72% extraction*)  malt extract, black treacle and caraway seed. Whilst  researching this bread I found it very hard to get a firm consensus regarding what the  flavours of Russian Black Bread should be. Some said coffee, old rye breads, chopped rye  and many other ingredients, but I think these flavours work well and will intensify over time.      *extraction: Grains are milled to create flour. They are then sieved to separate out the flour,  bran, germ and semolina. Wholemeal flour is where all these ingredients are added back  together, so you are eating all the grain. Or they are either left separate which makes the  whitest flour at around 72% grain and 28% bran, germ and semolina that are not added back
and will be sold separately. The 85% will have a higher proportion of the bran, germ and  semolina in the flour.

The only unpasteurised farmhouse red Leicester made in the world.  This version of Sparkenhoe red Leicester is the vintage profile; aged for 18 months, which gives it a strong, powerful flavour.  Made by Jo and David Clarke in Market Bosworth, Leicestershire, England.
May Hill Green

Made with a mixture of pasteurised milk of rare-breed Gloucester and Friesian cattle in a manner similar to Stinking Bishop, except that the rind is not washed. Instead the rind is topped by chopped nettles and coiled by a Beechwood lath to give the cheese a distinct character. The paste is semi-soft with a soft and runny texture and a peppery finish. Flavour is lactic with and fairly strong aroma. It is great cheese to serve on a cheeseboard or spread on flavoured bread. Made by Charles Martell in Gloucestershire. Vegetarian.

Gjestost is made using pasteurised cow’s and goat’s milk. The name is derived from the Norwegian for goat – Gjet. The cheese is made by boiling the leftover whey from the cow’s and goat’s milk together until the lactose caramelises. Norwegians enjoy Gjetost with coffee for breakfast, shaved thinly on flatbread or with spiced fruit cake at Christmas.

A delicious, creamy-textured, blue cheese from Carmarthenshire, Wales. Made by Carwyn Adams. When young, Perl Las (which translates as blue pearl in English) has a delicate blue taste. When mature, it becomes golden in colour and fuller in flavour.
Goat curd White Lake Cheese was started in 2004 by Peter Humphries and Roger Longman. Based in the heart of Cheddar Country they make a range of artisan Goat’s, Sheep’s and Cow’s milk cheeses. The goat curd is a very fresh version of cheese. The Goat’s milk comes from Rogers own herd,

Made by the Fabbri family in Tuscany. The Tuscan ewes enjoy fragrant and aromatic pastures, which produce rich milk. The rind is rubbed with olive skins to create the characteristic black colour, and the cheese is matured for six months to produce a harder texture and a full flavour.

Not quite a red or rose this is a natural wine made by organic farming methods. The grapes are harvested by hand and minimal handling of the Rojal grape is encouraged to get to the winery as quickly as allowed. The skins of the grapes are left in contact with the must (unfermented grape juice) for a few hours only. Aged in Tinajas clay pots to allow the wine to settle before bottling. Produced in small quantities. The wine is lively and fresh in the mouth. We have lightly chilled it to match the Red Leicester to retain a fresh and crisp opening.

Green Wine A really fresh easy drinking white from the N.W of Portugal, located 30 km from the Atlantic coast. This wine is made from a single variety Loureiro, which is one of the more aromatic grapes from the Vinho Verde area. A wine that is finding many ways to be enjoyed from simple summer drinking to sea food and light grilled meats. This links well to the May Hill Green semi soft style.

This may be one of the most unusual flavours from a white wine you have had so far. The theme this month allows us to have some fun and choose some more off the wall combinations. This Vin Jaune is made by the Savagnin variety and is made in a method close to a Fino Sherry wine allowing a Veil of yeast to form in the barrel. The bottle Clavelin is 62cls which is the desired amount of wine left after ageing from an initial litre of wine !

Brown Tinges This is a blend of Amontillados with the age of the youngest wine no less than four years. As Sherry wine goes this has delicate notes of flavour from the Palomino grape and careful oak barrel ageing. It lies somewhere between a youthful Fino and maturing Amontillado. The Bodegas is still owned by two families.
Jeio Rosato

Sparkling from the Prosecco producing area Valdobbiadene. I will leave the blue to the cheese! This super spumante style wine from the family Bisol. Made with mainly Merlot and Pinot Noir grapes and some Glera for the finesse .The colour comes from the skins of the two red grapes. With this in mind we have a super cleansing feeling to work with the Per Las cheese.

An aged Semillon with toasty barrel flavours from the toasted American and French oak. With concentrated flavours of coffee, toffee, anise and dried fruits developing in the glass we end with this super sweety from Australia.