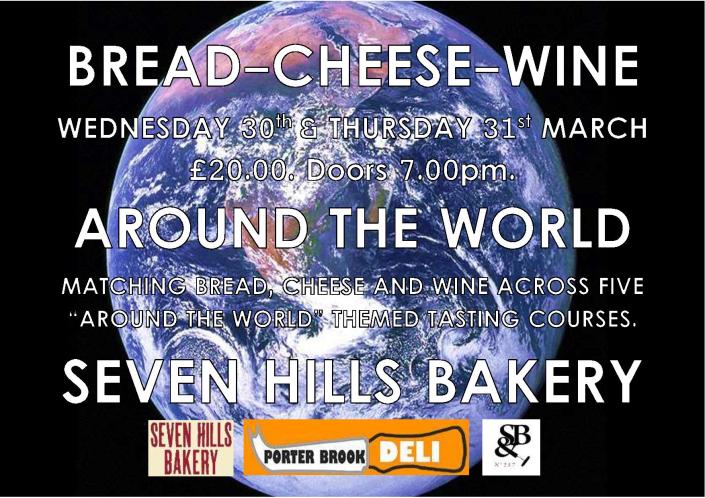 ITALY: Herb Focaccia.   A traditional Italian bread. Ours is made as a lean dough, just flour, water, salt and yeast.  Herbs and lashings of olive oil are then added. We make one third of the dough the night  before this is know as a poolish. We then leave this overnight in the fridge to mature. We  add this to the remaining ingredients as we mix the main dough. This bread is not shaped as  such, but is rather pressed into a tin.

HOLLAND: Sourdough.  Maybe not specific to Holland, but sourdough is a very traditional way of making bread, that  is fairly universal. No yeast is added to this dough. A wide range of yeasts and bacterias  exist on flour and in water  we ferment the flour and water together to make a ‘mother’ and  this leavens the bread. We make this bread over a three day process which gives it its  chewy, holey texture and slightly tangy taste.

FRENCH: Baton  What could be more French?! We use strong flour and long fermentation to create the  traditional chewy texture with a crisp crust. The large holes are created when the dough is  rolled. We carefully shape and roll the dough then place in a ‘couche’ (which can mean bed)  to prove in the fridge where they ‘sleep’ until ready to bake. We give our batons four slashes  with a razor blade to create the ‘ears’. The sign of a good baguette i when you can lift it up  by its ears alone!

IRISH: Soda bread  Also known as wheaten bread. Soda bread is the only bread we make that is yeast free.  Instead it is leavened with Bicarbonate of soda. A chemical reaction occurs between the  acidity of buttermilk and the alkaline of the bicarb. Because of this the dough must go  immediately into the oven, or it will collapse. This loaf is made with Organic buttermilk from North Yorkshire and wheat grown in North Yorkshire:a local affair. Both the buttermilk and course ground wholemeal flour are made for us especially.

SPAIN: Potato & Rosemary Bread  We have chosen to accentuate the flavour of the Manchego here. Potato gives the bread a  very soft, fluffy texture. We also add a little honey to bring out the sweetness of the  rosemary. This is a yeasted bread and is made over two days.

This cheese is related to Mozzarella as it uses stretched curd and it is usually made in southern Italy. It gradually changes from a sweet, milky, buttery cheese to a hard, pungent one with gamey and oily flavours. It can be made with sheep, goat, cow or buffalo milk.

The Dutch make some really great cheese. This 2 year old Reypenaer Gouda (VSOP) has an intense deep caramel and butterscotch flavour. During its maturing process  the cheese looses 25% of its original weight and develops protein crystallisations. Cow, pasteurised

Winner of the renowned Medaille d’Argent 2010 in Paris, this cheese is a superb example of the genre; supple, and winey with a slight earthy finish. It has a distinct, thick grey rind, with yellow or red moulding, and a straw-coloured curd. The flavour is soft, fruity and slightly salty. Cow, unpasteurised

Made in County Tipperary by Louis & Jean Grubb. It has a  white appearance or paste increasingly turning towards a buttery yellow as it matures. The rind is edible and is intrinsic to the cheese, it contributes to the breaking down of the paste adding further flavour and complexity. Good for eating between 3 to 6 months

This well balanced semi-hard  raw sheep’s  milk cheese is rolled in locally grown rosemary. It has a lactic, slightly tangy interior with small ojes (holes) in it. It is made by a small producer and was developed in 1986. Made with milk from Manchego sheep.

A dry, light and fresh sherry wine which we chill to serve with the Rosemary Manchego. A young wine made from the Palomino grape. In the hot south of Spain this grape takes on the chalky soil notes that the vines are grown on and hints of salty air which are so important to the area. A classic combination which lifts the palate and remains fresh to the end of the glass.

In the heel of Italy this is dark in colour although fresh in the mouth backed up by dark berry flavours with a dash of black pepper spice. The vines were planted over 70 years ago and still perform well. The 2013 vintage was a little cooler than normal which means the wine holds a little more acidity to balance the richer fruits. Mark Shannon is the winemaker who hails from California where the grape is known as Zinfandel. He ages the wine in French and American oak for only 2 months which allows just a little influence and softens the younger wines.

Organically grown grapes. A winery we have been pleased to show on a number of occasions. Situated on the plains near Treviso and surrounded to the north by the imposing hills. An hour drive west of Venice finds this winery which has produced grapes and wine since the early 1400’s! They own most of the vineyards which produce the grapes for this wine. A lively pleasant opening with hints of cashew nut in the background. The idea of using the Prosecco with Cashel Blue is to keep the palate open and receptive to all the flavours and balance with the bread.

To go alongside the Tomme de Savoie we have the refreshing Riesling, delicate with touches of white flowers, a mineral presence and a touch of underlying sweetness. As the wine loses its chill the bouquet opens out .The Mann family are practising organic farming methods and are keen to protect their environment. The versatile Riesling variety, often sadly overlooked, is a good partner to various meats, fish and cheeses.

This fruity restrained red has plenty going on and at 12.5% can cope well with aged Gouda and spicy bits. Plenty of red berry fruits backed up back a dash of black pepper. The southern Rhone loves Syrah and with a good drop of the white grape Viognier to lift the more earthy notes.